If anyone has questioned my sanity when it comes to loving my dogs - here's a new one for you!

Sarge and Stella had their appointments to get spayed/neutered today.  I was a bit nervous - they still seem so young to get knocked out and cut open, but we did it anyway.  Didn't want any baby Sarge or Stella's to appear - inbreeding is not cool!  So, I dropped them off bright and early this morning at the vet.

Not long after getting home the vet called because Stella was having a delayed clotting time on there pre-surgery tests.  So, they ran an extra test and everything turned out OK so they were able to move ahead.  But, the poor doctor.  While I had him on the phone, I asked him about Sarge's surgery.  I've never had a male dog before, so my ignorance exceeds me.  I asked him what "it" was going to look like...because he was getting his "balls cut out"essentially.  And the guy laughed!  Thankfully, he had a sense of humor in my lack of better words :)  I told him I've seen some neutered boys and "it wasn't cute" - I wanted Sarge to still be cute because he still had to impress the ladies...again, I managed to get a laugh.

I picked the pups up just after 3:30 this afternoon and they were happy to see me - doped up, but happy.  They had the surgery done via laser so the healing time should be much faster and easier for them!  Stella seems to have the worst of it - she threw up not long after getting home and doesn't want to drink anything.  Sarge is doing great - sleepy but with bursts of playfulness and he drank some water.

So, they are resting peacefully now!  Hope they feel better tomorrow and can eat a good meal! 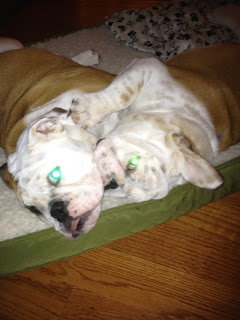