Its was nice with my busy September that I was on my 4 "off" weeks of Cayston.  It just makes traveling a bit easier not having to worry about bringing all the "stuff" and then having to be sure I'm somewhere that I can do my treatment in the middle of the day.

That being said, I've finished my 1st "on" week.  I have been coughing a bit more - which I'm not sure if its cause of the Cayston, the weather changing (and my sinuses have been acting up) or from my increased exercise.  I feel good just coughing some :(  I've held off on the flu shot just in case its a bug.  But not having my flu shot makes me nervous - I DO NOT WANT THE FLU!!  I'm going to get it next week (and Will as well) just so I feel better about it.

As for exercising - I have been coughing while on the treadmill the past few times.  It isn't a full out coughing fit - just more of clearing some of the cobwebs.  Usually one good hack gets it out of the way and I keep on keeping on.  I've started running on the treadmill...well, more of a quick jog.  I fully believe that this body was not made to run (and that has nothing to do with CF)...I have short thick legs and it hurts cause they jiggle.  I know, that probably put an unflattering picture in your mind - sorry!  I've started slow, not going to complete a marathon anytime soon but I'm actually enjoying it.  I feel energized afterwards...and hungry!  My appetite has increased since I've been running (I didn't think that was possible!) and I find myself wanting to munch throughout the day.

Other than Cayston and a slight cough, not much going on.  We visited Will's parents in West Virginia last weekend and had a game watch at his Aunt & Uncle's house for the WVU game.  It was a GREAT time to say the least.  I wish we lived closer so we could get together for every game! 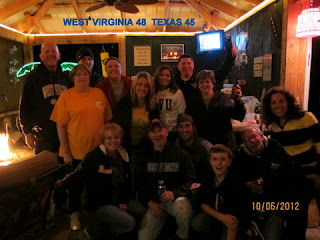