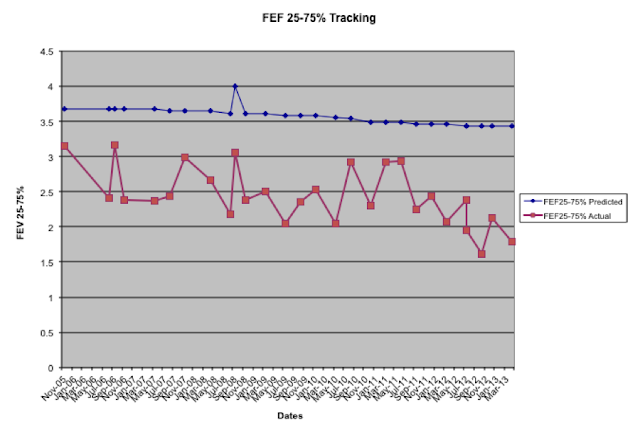 For you non-CFers - this is the measurement of how my small airways are functioning.  As you can see, its been steady downhill since July 2011.  The blue is where I should be as a "healthy" person, and the pink is where I am.  This dates back to 2005 to last week.

I've been trying to think if anything changed around that time, and can't think of anything.  I had been on Cayston about 9 months at that point in time and we got the puppies in September 2011 but I can't imagine that has any effect since I've always had dogs around.

I'm just a bit baffled and frustrated.  I've been doing my Cayston and exercising, so what the heck is going on?!?!

On another note, I did my trial of Hypertonic Saline and all went well :)  For the test, they had me do lung functions, nebulize some Albuterol, then the HTS and then lung functions again.  I coughed a bit on my first set of lung functions and then even more after the treatments.  My coughing was messing up the results because it looked like I wasn't emptying out my lungs, so I kept blowing and blowing until I was all red, then coughing more.  But, the results were slightly improved, so that's good!

It has a super salty taste and feels like you are inhaling the ocean.   Know how it tastes when you get salt water in your mouth - yep, just like that.  Not super enjoyable, but I can tolerate it.  So, I agreed to give it a try!  The prescribed me to do it twice a day - eek!  So, once I get it, I'll have to do the HTS, then some huffing exercises and my Acapella (I'll give more details and a pic of this once I start), then the Cayston (when I'm on it).

The cool thing is, I'm going to be the first patient in my CF Center to be prescribed the faster method!  Its available with a rapid e-Flow so it will significantly reduce the time it takes to nebulize the meds!!  I'm pretty excited about that.  Its been ordered from the CF Pharmacy so my goodies should be here any day now!