I had a great, but exhausting weekend in New Jersey at my sister's dance competition.  I didn't do a single thing, but sitting can really wear you out.  How she did all those dances, I have not idea...and they do this 5-6 times in about a 3 month span - holy cow!  Here is an awesome pic of my sis: 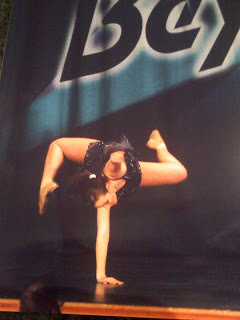 The competition was like a cross between "Real Housewives of NJ" and "Toddlers & Tiaras" - haha!  There was make-up, hair & costume changes galore.  All the parents were super nice that were part of my sister's team, but had a run in with another "dance mom".  She yelled at me for sitting at a table that she claims was "hers"... WTF?!  (meanwhile the table was empty when we sat down)  My stepmom left me unattended for 2 minutes and I get yelled at - haha!  Good thing I'm a nice person or I'd have had a few choice words for her. That's my goal in life to be more confrontational - I just let stuff slide too easily sometimes.  Guess she thought I was younger than I am and could boss me around - I don't think so!
I got to surprise my youngest sister on Friday when my dad & I picked her up from school.  It was so cute when she saw me, she yelled "that's my sister!!!".  I felt like a celebrity :)  Here's a pic of us: 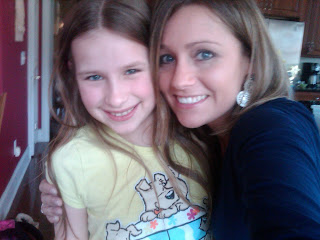 An the post wouldn't be compete without a pic of Zoe - love her!  Makes me want a little lap dog :) 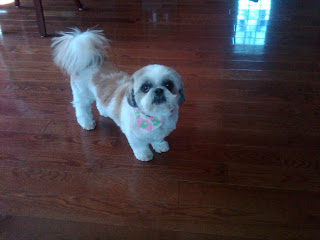