Will & I spent the weekend preparing for our buddles of joy to arrive this coming Saturday.  We cleaned out Sophie's old kennels, which we will pass down to the new babies, and bought some puppy supplies:  food, bowl, toys, shampoo...all the goodies.  SEE: 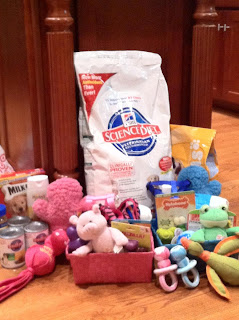 As we walked in PetSmart, as usual, there was a local Humane Society there with dogs and cats available for adoption.  I felt like crap.  There are so many animals in this world that just want a home and we are getting ours from a breeder versus a rescue.  I know my puppies need a home too, but they aren't at risk of being put down if they aren't placed in a reasonable amount of time.  My heart just broke looking at those sweet faces who would be in hog heaven to find a forever home outside of the shelter.
Not sure if I've mentioned it before, but one day I plan to open a rescue of my own.  I want to save those poor animals that aren't given a chance to make it.  I blame people for this overpopulation of unwanted pets.  I mean, get your pets spayed/neutered people!!!!  If you're just going to let your pets roam freely and risk getting knocked up - shame on YOU!!  Its your fault I feel guilty for not being able to take every homeless animal home (plus Will won't let me)!!
I'll get off that soap box and back to my feeling guilty.  I imagine most people know about the hurricane that hit the east coast this weekend.  We are a few hours from the coast, but I figured we might have some rain from the storm, but no - it was a beautifully hot South Carolina weekend.  We were shopping and enjoying the sun while others were evacuating there homes and preparing for a nasty storm.  Kind of crazy how you don't overly worry about things if it doesn't directly effect you - guilty again.  Although, I do have some family and friends that were in the path - thankfully, all are OK!  My thoughts and prayers are with those affected!!
Labels: Animals Pets