I've dreaded the day that it would happen and hoped it was far off in the future, but it happened.  My sweet, stubborn, sassy tripawd passed away.  She had her appointment in June that showed the nodules in her lungs grew so we stopped the chemo pills.  She was continuing to do very well and be her spunky self.

I had an out of town trip and I was worried to leave her for such a long time and told Will to call me if anything funny happened.  Unfortunately on day 3 of my trip, I got the call that she had been throwing up multiple times and acting very lethargic. I decided I needed to get home as I couldn't imagine something happening and not being there. So, I got home the next day (which was a Friday) and she definitely wasn't right.  She had thankfully stopped throwing up, but was lethargic and not too interested in food.

We babied her through the weekend as she was status quo.  On Monday, both Sarge & Stella had an oncology appointment scheduled, so that was a big relief to know she was going to see her care team.  Her x-rays showed the nodules had grown and spread.  Plus based on her recent incidents, they believed the cancer had spread to her abdomen.  We didn't do any extra testing as that would not change our treatment plan.  Our goal continued to be to keep her comfortable.  I made her chicken and rice and she ate that on Monday, but basically stopped eating after that and would throw up if she did eat anything or drink too much.

I reached out to our local vet and a hospice/euthanasia company as I was afraid with her lack of improvement that we were reaching the end.  Stella's oncologist called me Thursday evening to check on her...and I'm so very grateful she did.  I went over what had been going on since Monday and asked if she was giving me the signs that she no longer was comfortable and enjoying life.  The oncologist agreed that the time was coming to an end and that we would need to make the decision as to not have her suffer.  The next morning (Friday, 7/22), Will and I made the decision to call our local vet to give her peace.  She was very lethargic that morning, but we had some friends and family stop by to give her love and say their farewells.

My girl was tired, her little body was shutting down.  She fought long and so very hard.  I will forever be proud of her determination.  She never batted an eye at the roadblocks she encountered until that last week.  So, I have full peace knowing that we made the right decision for her.

Stella was one of a kind.  She didn't take crap from anyone or anything.  She was all alpha...she didn't care if it was a chipmunk or an elephant - she was in charge.  She was so playful - she and Sarge provided years of laughs as they wrestled, chased and napped together...always by each others side.  They were truly the epitome of best friends.  They may bicker over a toy here or there (Stella winning, of course) but they would go right back to getting along...and sleeping in strange positions. 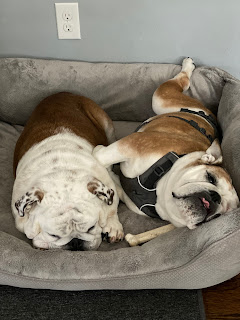 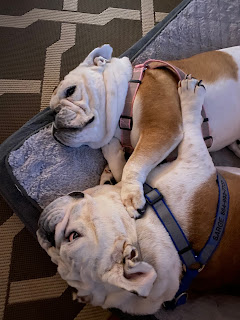 She loved her blue ball she got a few years ago.  She squeaked it until finally it gave out - I was very thankful for that.  But, she didn't tear it up, instead she carried it around with her, and loved to sleep with it by her side.  And of course it rolled under the couch too many times to count, so she would lay staring under the couch and growling until someone got up to get it.  She also loved her snake - she'd hold it by the end and flop it all over the place.  She had one as a little puppy that she loved and once it was destroyed, we got her another one that she destuffed but continued to love and play with.  I won't be able to look at a stuffed snake toy and not think of her. 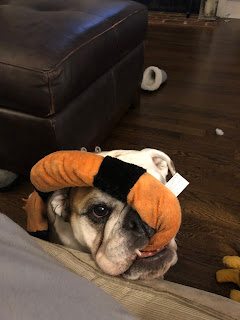 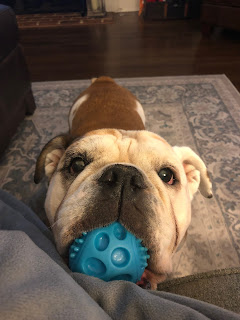 She was the one that pushed the boundaries.  She didn't know she was a bulldog...she thought she could run and catch the deer in our yard in WV.  She even thought she could fly and jumped off a ledge at camp about 3 feet tall, landed then continued running.  Unfortunately, that event lead us to the vet for a partial tear in her knee.  Strict bed rest did the trick!  She was always scratching her eyes because why go around a bush when you could go through it.  Hence the numerous rounds of the cone of shame and then our awesome Instagram friends sent us a donut! 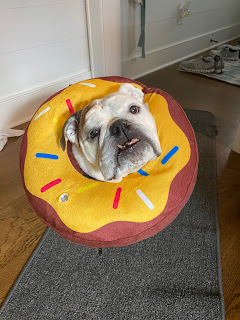 She loved the water.  She was part hippo and would just bounce off the rocks on the bottom of the river.  And she loved to collect rocks, then go put them in a pile on the shore.  It was rather funny to watch.  In the pool, she always tried to bite the water coming through the filter.  She was always the one that was wet from nose to tail...she had no fear sticking her head underwater. 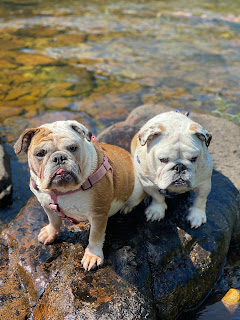 She was a daddy's girl.  She became more of a momma's girl once she got sick...I think it was due to all the time we spent together going to appointments and nursing her after her amputation.  She was always loving and wanted to be near you, but it was even more so after she got cancer.  She was always the girl that when she would get petted, she'd plop over and go belly up!  I sure miss that soft belly. 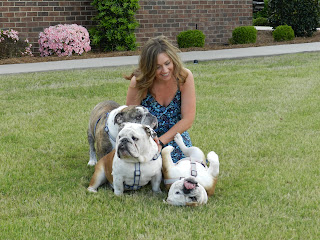 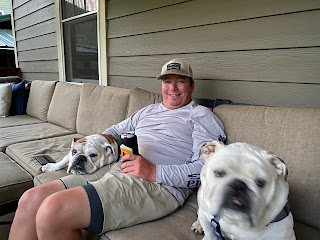 I could go on and on...I've probably lost a few readers already. That's ok.  This is for my #1 girl.  Tellie, you were so stubborn and frustrated the hell out of me some days, but man did I love you.  I would do anything to have you back with us.  I am gutted without you.  And a little lost.  I've spent so much of the last year and a half taking care of you and now I don't know what to do. 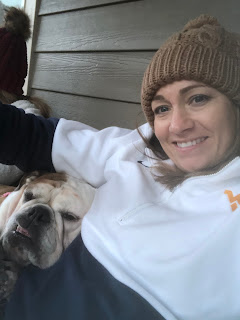 Farewell Stella Artois, my Tellie baby, Tella-bug, Tella, Stelly, Stella-Bella, crackhead Tellie, sass-a-fras (and many more nicknames).  I will see you at the rainbow bridge...try to be a nice girl. 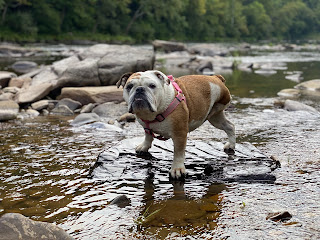 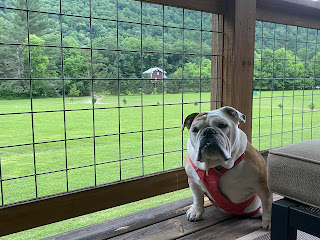