This weekend revolved around me.  Will decided to head on a quick trip for the weekend and I had some previous engagements that I didn't want to back out of, so it was just me & Sophie for the weekend.  Although, I miss my hubby dearly while he's away, ME-Time is also great!
I got to sleep in without feeling guilty (Will gets up early most days) and I got to lay around in my PJs without getting funny looks at noon.  Fortunately, Sophie is a sleeper too!  She will sleep 12+ hours & not even stir or put her paws/face over the side of the bed trying to wake me.  I couldn't imagine having a dog that wakes up before the sun wanting to go out - yuck!  I chose the bulldog breed for a reason :)   Laziness is fine by me!
On Saturday, I played Bunco for the first time...its a pretty cool game.  Sounds kind of lame just rolling dice, but I had a blast.  I was getting stressed out trying to add the points, roll faster...if you've ever played, you understand.  Hopefully, I'll get to play again soon!  That was the big event of the weekend, so I relaxed and took Sophie for a few walks (they are fairly short as she gets out of breath before me!).

Another perk of ME-Time, I get to watch chick-flicks without all the sighs, moans & critiquing.  I can cry without being made fun of too!  Some of my viewings were:  The Last Song, Dear John (yes, I love Nicholas Sparks), Confessions of a Shopaholic and Twilight: New Moon.  After watching New Moon for the 100th time, I'm beginning to think I'm turning to Team Jacob - he's just too cute!  I watched some Beverly Hills 90210 re-runs & this new show called One Born Every Minute.  Its a documentary on a Labor & Delivery Unit in Ohio - pretty cool.
Will got home on Sunday afternoon and I decided to make a good dinner.  I made my first lasagna and it turned out great, if I do say so myself.  I've made them a hundred times growing up and helping my mom in the kitchen, but this was the first time it was all me.  Then, I used my mixer I got for Christmas and baked a cake - yet, another first!  I'm no Suzy Homemaker, so I was mighty proud.  Here's a pic of the cake - I used the giant cupcake mold that some friends got me: 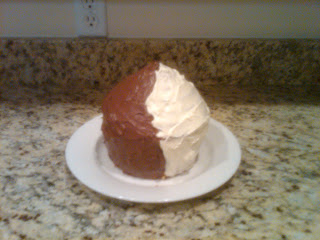 Its a yellow cake with 1/2 chocolate icing (that's what Will likes) and 1/2 vanilla icing (that's what I like).  We were so stuffed from dinner last night, we didn't even have a piece.  So, tonight - look out cake, here I come!  I plan on enjoying a slice as I watch The Bachelor.