It's time for a pupdate!!! Both Sarge and Stella continue to grow daily.  Its strange because being with them everyday, it doesn't seem like they are growing right in front of me, but they are.  I was flipping through some pics on my phone last night and was in shock at how small they used to be!  They were so tiny and wrinkly, but now they are so big and wrinkly!
Potty training is complete!  Both now understand the concept not to pee in my house - thank God!!  Stella may still have a slip up when her UTI is acting up, but she has made great progress.

Unfortunately, Stella is still battling the UTI that started back in October with her one night stay at the kennel/boarders.  She had one dose of antibiotics and some pain meds but that didn't really help the uncontrolled peeing...so she was put on some special food (Royal Canin Urinary SO) which has helped greatly, but it makes her extra thirsty which then makes her have to go potty even more.  Just last week, the vet took another urine sample to send off to the lab and discovered she still has bacteria growing in her urinary tract that was immune to the first dose of antibiotics...so, she now has a new antibiotic to help fight that bacteria.  Fingers crossed that this will be her final step to getting 100% better.

Sarge is still laid back as ever.  Its kind of strange having a puppy that can be so well behaved.  If I walk out of the room, I know he is going to be sitting in the same spot I left him when I get back...Stella, not so much.

Will has been super busy and stressed with work, so we decided to have a family outing last night to Petsmart.  The pups hadn't been there in quite a while, so it was exciting to take them and let them walk around the store.  They were a bit wild but overall pretty well behaved for their first stroll in the store.  The pups got to see a chinchilla - I was a second too slow on the pic, Stella and the chinchilla had been looking at each other, it was so cute! 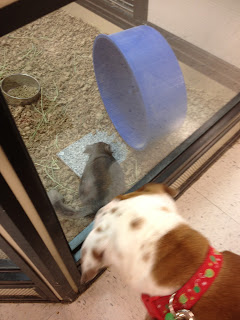