I was too busy blogging about the Great Strides event and not having any pictures of my college graduation that I completely left off my most recent CF Appointment, which took place on May 9th.

Not much to report.  I've been feeling great, working out, eating good (not as good as before, but still not loaded with candy and pop), and enjoying life.  One weird thing did start the 1st week of May.  I noticed my heart doing some weird things.  It started just once or twice a day, then progressed to many times.  What it is you ask...I don't know.  It's hard to explain.  Typically you don't feel your heart beating or think about it.  But I was watching tv and noticed it started to flutter a bit.  I thought maybe I was nervous watching a suspenseful show.  But then it happened again the next day, and again the following day.  I should have been keeping a record of when it occurred and what I was doing.  Oops!  But, I do know that it has been while I haven't been doing anything strenuous...like watching tv or laying in bed.

Sometimes it feels like a flutter, then sometimes its pounding.  You know that feeling when you go over a bump and your stomach drops?  Well, it kind of feels like that but its my heart.  That's about as good as I can explain it.  I put my Fitbit back on to try to record my heart rate, but it's a piece of crap and died again after a couple days and won't charge or turn back on.  😠

Back to my appointment.  I mentioned it to my care team.  Of course that morning, it did it's weird thing...I went to the gym for my workout and then it stopped.  So for a precaution, they hooked my up for an EKG.  I haven't heard that anything was odd, so I'm assuming it was normal.  Plus, I didn't feel it do anything funny while I was hooked up.  Always the same thing, symptoms never show themselves to the doctor.

So, it has been happening here and there since then.  So, I ordered myself a new heart monitor!!  Plus I want one for working out anyway! 🙂  Let's hope when it comes in that it works!!!  I was told to contact my care team if it keeps up, but I haven't done that.  It's not scary feeling.  I don't feel like I'm going to die.  It's just weird and makes me pause.

I'll keep you all posted.  I've been watching my caffeine, making sure I'm getting some electrolytes & potassium.

Not much else to report.  My care team has a new doctor, so it was my first time meeting her.  She seems great and was very interested to learn my CF story.  I think bringing some fresh blood into the group is a great thing!

I had my annual blood work.  Except the Glucose test, I will do that another day.  Was not in the mood to fast til 1pm and I had things to do that morning (the gym!).  Plus, I tell them all the time that it's fine...lol.  I had my bone scan last visit (February), but they STILL don't have the official reading from the radiologist (or whoever it is that reads those).  Crazy, right?  I said I was glad it wasn't a life or death result.  Sheesh!

That's all for that!  I'll keep monitoring this wacky heart thing and see where we go from here.


Just got a new shipment of meds! What a full box!! Cayston, new handset, Hypertonic Saline & Zenpep.  I'll be starting Cayston this weekend. 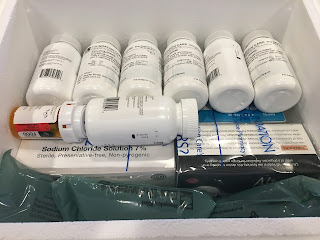